As recounted by the esteemed Sister Matic Debauchery.

Well, this is it – the full sister history of our little Manchester house!

So, let’s start at the very beginning.
A very good place to start.

As is our custom, Sister Opehlia Balls discussed the order with the new postulant. She explained the various hardships and strictures associated with our vows. Seeing the continued fervour of her vocation, Sister Ophelia arranged the ceremony of vestition. This is where Anorak would be entered in to the Novitiate and presented with her habit and white veil – another chapter in our sister history.

Our sister history records that this was conducted on the Sunday of the Manchester Mardi Gras 1996,. This is effectively on this date that the House came in to being.

Sister Anorak’s first outing was then to assist various other Sisters. They manned a stall giving safe sex advice and being generally raucous outside the Rembrandt Hotel on Canal Street.

The Sisters of Perpetual Indulgence have rules. One of them is there must always be at least two Sisters out at any one time. And one of them must be a Black Veil.

So, during the next few months there were lots of visitors to Manchester, and our sister history really started to take shape. Various Sisters from around the UK, particularly the London and Edinburgh Houses, came to Manchester.

They took Novice Sister Anorak with them on various manifestations up and down the Street of Shame. In early 1997, having completed her required minimum of 13 manifestations, Sister Anorak (Annie) became a fully professed Sister. She was presented with her black veil, the identifying badge of a fully-fledged nun.

Continuing our sister history, the next novice to be admitted to the Manchester House was Sister Gypsy TV Filmstar. She was given her white veil some time in early 1997 and became professed later that year.

And so the House began to make itself known to an unsuspecting world. Early on, a rapport was established between the Manchester House and the Poptastic club-night. This is famous on Manchester’s gay-scene for its relaxed attitude and strange, eclectic mix of cheesy, camp pop and indie music.

Annie and Gypsy became established as its unofficial door-whores, standing outside loudly critiquing the dress-sense (or otherwise) of the various punters. As Sister Gypsy was wont to put it “Velour is not a fashion. Fuck off!“

Also working on the door at Poptastic, was a young man who was every bit as ascerbic, camp and raucous as both Annie and Gypsy. He also felt his vocation stirring. So off he went to become the fabulous and glamorous Sister Mary Virgin on the Ridiculous. Let it be shown in our sister history that she became a novice in 1997. We think she was professed in 1998, but everybody was too drunk to remember.

Around that time, the, the gloriously unhinged Sister Groinne of the Burnished Buttocks. She became the fourth Sister to join the Manchester House.

The Sisters then did all manner of manifestations,. These included blessings and other gigs, mostly rattling buckets and handing out condoms and leaflets for a number of charities. We were a regular feature of the Manchester Mardi Gras and London Pride too!  We also became one of the most eccentric and in-your-face fixtures of the Manchester gay scene.​

To read about my personal story of how I became a nun, have a look in my Biography Section here.

Sadly, during this period of our sister history, many of the Sisters of the London House, had a visit from Auntie Ada. They moved on to the great convent in the sky, becoming Nuns of the Above as departed Sisters are known. Others moved on and the London House became defunct.

The membership of the Manchester House was now Sisters Annie, Gypsy, Mary, Groinne, Daisy, Matic and Martini. The house remained stable for many years and we did all manner of things. Rattling buckets and distributing condoms for organisations and doing pastoral work in the gay community. We also blessed all manner of things including a sauna. We gathered up our habits and went on all sorts of marches and appearing at various events. I remember us opening the Leeds Hyde Out festival in 2000.

I am personally particularly proud to have performed the world’s first Ceremony of Debaptism. This is where one is exorcised of the demons of superstition and guilt. We did this on Sister Annie at Manchester Pride 2009.

We also got involved with various other Houses worldwide – exciting times! Annie, Gypsy and Mary went on a pilgrimage to San Francisco; and Annie and Gypsy went to Sydney. There they did a famously surreal guided tour of Sydney Zoo, which included reading poetry to dingoes.

And so our sister history continues. Things don’t stay the same for ever. People move on, and organisations change. Annie and Gypsy, having done sterling service for a number of years, started to take something of a back-seat. This was from about 2005 onwards. They’re remaining in the background but occasionally leaving the convent for important or glamorous events. Or anything with a free bar. Sister Groinne got a high-powered job and moved out as did Sister Jacqui. And myself, Sister Matic, moved down to London for a few years, where I was involved in re-founding the moribund London House. This was together with Sisters Sissyphyllis and Angel Popstitute,. They are two lovely French Sisters, originally from the House of Nantes. They moved to London by way of Paris.

​It’s easy to forget, or perhaps people don’t realise, what a dark time the 1980s and 90s were. Over the years since, there have been significant improvements in all manner of causes about which the Sisters care deeply. They’re also, since our foundation, been the focus of our activities. As a result our activities declined for a few years. We were still out and about, working with various charities, marching, screeching at the general public. We continued being generally fabulously outrageous and disgraceful, but not quite as visible as we had been.

I moved back to Manchester in about 2009, and started to manifest once again. In 2012, though,  my two closest friends both died tragically young. As a result of which I decided to go on to Nun-time myself. One of them was the wonderful Sister Daisy. With her impeccable timing she became a Nun of the Above on the Sunday of Manchester Pride 2012. She was aged just 47. Bloody attention whore. Our loss was Heaven’s gain and I can imagine the afterlife being much more fun as a result.

The other was Andrew, whom I loved like a depraved brother. He was a long-standing good friend of all the nuns and used to accompany us on our manifestations. 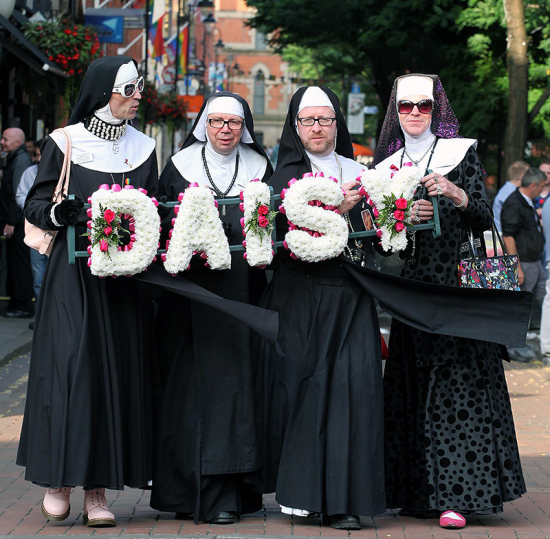 Daisy’s Sisterly send-off is probably worth mentioning. Viking warriors used to be burned in their longboats.

In Sister Daisy’s case, the “DAISY” floral tribute (see photo above) was stolen from the back of the coffin in the hearse. Of course it was with Peter, Daisy’s partner’s, permission! She was taken, in floral tribute form, for one last drunken troll down the watering holes of Canal Street.

At the  end of this last manifestation, the petals of the flowers were picked off, one by one, and dropped in to the canal. This is where they drifted off to eternity. And this was all done with the mixture of solemnity and respect. And raucousness and outrageous camp black humour you would associate with the Sisters.

Daisy would have loved it, and I can hear her ethereal laughter as I write this.

Your vows as a fully-professed (black veiled) Sister are for life. So, although many of the original Manchester Sisters are no longer as active, we are still involved. Activity carried on, albeit in a low key way. Sister Jacqui Moff was Black Veiled during 2013.

​But, the time inevitably comes for the torch to be passed on to the next generation in our sister history. During later 2016 the house became very active once again.

Sister BangBang LaDesh was Black Veiled on St Valentines Day 2016 and is already our Mistress of the Media. Our newest recruits are Sister Polly who was Black veiled in June 2017 and Novice Roly and Novice Judy who were vestised in April 2017.  Sister Jacqui moved on to pastures fresh, whilst our new Postulant Poppy started with us. These days I am in the background as Mistress of Polari, including producing the Polari Bible and the Polari Koran, but that’s a whole different story.

The House is in bona fambles (good hands), and I look forward to reading an update to our Sistory in another 20 years.

Unless Daisy and I are busy elsewhere laughing raucously with the angels.