The history – or Sistory – of the Sisters started back on Easter Weekend 1979. The following text is a slightly edited version originally from the web site of the San Franciscan Sisters which you can access here. With chunks from Sister Phyllis Stein the Fragrant (original Mistress of Archives) & Sister Kitty Catalyst, O.C.P (former Mistress of Archives) & one of our Founders, Sister Vicious PHB.

Our story begins a long, long time ago, in 1976, far away in the land of Oz (Iowa). A convent of Roman Catholic nuns lent some retired habits to The Sugar Plum Fairies who were performing their version of The Sound of Music. One year later, one of our Founders, Sister Vicious Power Hungry Bitch (Ken Bunch), moved to San Francisco (1977) and brought those habits to the streets of the Castro district….

On Easter Weekend, during the time of the “Castro Clone,” being extremely bored with the conformist atmosphere three men went out into the streets to challenge the world: Ken Bunch (Sister Vicious PHB), Fred Brungard (Sister Missionary Position) and Baruch Golden.

They went in full, traditional habits through the streets of our city and down to the nude beach. One even carried a machine gun (for protection). They were met with shock and amazement, but captured everyone’s interest.

Their next appearance was at a softball game where their pompon routine all but stole the show.

In the fall of 1979, Sister Hysterectoria (Edmund Garron) and Reverend Mother(Bill Graham) went to the first International Faerie gathering and encountered even more men with the calling. Our four founders, Sister Vicious PHB, Reverend Mother, Missionary Position and Hysterectoria-Agnes convened their friends, chose our name (The Sisters Of Perpetual Indulgence) and composed our mission statement: to promulgate universal joy and expiate stigmatic guilt.

The new year brought the new Order with Sister Hysterectoria designing the first habits after a Flemish 14th century ladies-in-waiting and French cloister’s wimple, and through a city grant, commissioned the first set of habits and “Ear Brassieres.” Sister Secuba, a calligrapher, created the logo and the original banner under which the Sisters made their first public appearance.

During the Three Mile Island Protest in March, The Sisters performed their “Rosary in Time of Nuclear Peril,” including the ever-popular pompom routine. This small group hit big, making every paper and gossip channel immediately. By August they were front page in gay newspapers, chasing hate-mongering Christians out of the Castro and the Polk neighborhoods.

In October the city saw its first fundraiser with Sisterly flair: a bingo/disco benefit for gay Cuban refugees at Metropolitan Community Church (MCC). The famous columnist for the San Francisco Chronicle (Herb Caen) gave us our first mainstream press coverage announcing the bingo.

So many people turned out for the event that a second seating had to be thrown together to accommodate all of the bingo players. After four cards had been played, everything was moved to one side and the disco ball began to spin. This marked one of the largest fundraisers by a small community organization: over $1,500 was raised in one evening.

Mother Inferior in Sydney, Australia founded the second SPI Order in the world.

The Sisters continued to raise tempers, eyebrows, and funds throughout the next year, stacking up multiple letters to the editor in protest of them.

But their popularity increased. They could be found at many events, fairs and fundraisers spreading joy and cheer, postcards and t-shirts. In September we produced the first ever fundraiser for the Gay Olympics (now called The Gay Games), a baseball game between the Sisters (playing in our habits) and the Gay Men’s chorus.

We got them drunk in the 8th inning and scored 40 runs beating them! On Christmas Eve, 1981, the Sisters were cited for “peddling without a license” on the corner of 18th and Castro. “Sisters don’t peddle,” insisted Sister Missionary Position, “we receive donations and give tokens of joy. It’s just coincidental that it happens at the same time.“

The Sisters produced the world’s first fundraiser benefit for an AIDS organization. It was a dog show on Castro Street with the recording artist Sylvester serving as a judge.

The third SPI Order in the world in Toronto, Canada is founded.

The city’s health scene had hit crisis levels during this year.

STD’s were spreading at a pandemic rate and the “gay cancer” was contaminating everyone with fear and prejudice.

Registered nurses Sister Florence Nightmare and Sister Roz Erection joined with a team of Sisters and medical professionals to create Play Fair!, the first safer sex pamphlet anywhere in the world to use plain sex-positive language, practical advice, and humor.

It was so well received that it went through a second printing within just a few months.

It was paid for, in part by sex party benefits and the sale of ashes from the burned down Barracks Bath House. You can download a pdf version of it here: The Sisters PlayFair leaflet.

June brought the Second Annual Dog Show in the Castro. The Sisters were joined year by Jeanne Dornacker, Shirley MacLaine and Sister Boo Boom as MC’s.

Pushing the political envelope, Sister Boom Boom ran under the ‘Nun of the Above‘ ticket in the race for Supervisor of San Francisco. Her iconic campaign poster featured the dome of City Hall with Boom Boom on a witches broom flying above and her purple exhaust spelling out “Surrender Diane”, meaning the Mayor Dianne Feinstein. Amidst all of the brouhaha about whether or not she should be allowed to run, she campaigned hard, spoke eloquently, and won over 23,000 votes. Frightfully close to winning, the City subsequently passed “The Boom Boom” law forcing future candidates to use their birth names.

A meeting with Mayor Dianne Feinstein had her screaming “When I see the Sisters I just see red!” So we planned our Red Party on May Day (International Communist holiday) at the White Russian hall which brought controversy. The woman managing the center was the daughter of the head general to the czar in the 1917 bolshevik revolution. We learned that “white” and “red” are like oil and vinegar! 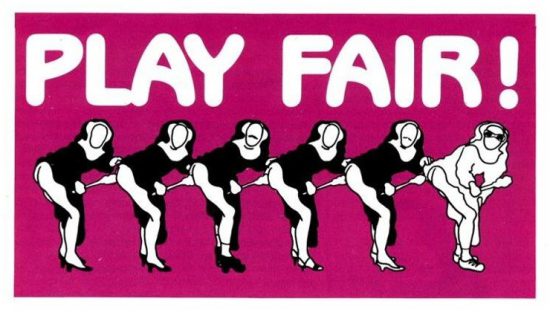 The first AIDS Candlelight vigil in 1983 was orchestrated by the Sisters, led by the banner “Fighting for our Lives,” which was painted on her apartment floor by Sister Vicious PHB.

One of the many speakers to the weeping and angry crowd was Sister Florence Nightmare. She was not only a health care professional, but advocate for PWAs and was herself HIV positive. Her article “Well and Good,” in the Sentinel, combined observations of a man living with AIDS and practical insights of a medical professional. She and her “friend” (don’t we mean lover?) appeared on the August 8 cover of Newsweek which earned her the moniker “AIDS poster boy”.

The article, about gays and AIDS, was the first time that the topics were handled in a fairly unbiased manner and that the entire nation was able to come face to face with AIDS.

For their efforts the previous year, Sisters were honored with five Cable Car awards including outstanding theme event, outstanding athletic event, and “Most Outrageous” parade float: a fully functional 50 foot missile with nuns in military habits launching our “War On VD” campaign. Not bad for such a young group. 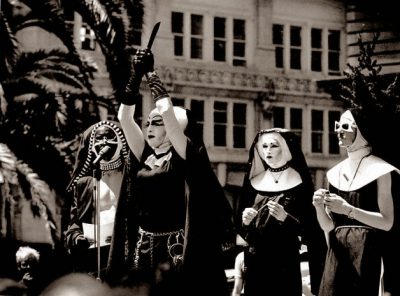 Marching in the Pride parade that year inside the shaft of a 40 foot penis covered in a huge condom, Sister Mysteria was the last nun at the end of the penis with two huge flesh covered beach balls connected to unbilical chords bouncing the entire length of the parade behind her! It won the Sisters another “Most Outrageous” award and stunned silence from spectators!

The Toronto, Canada Order of SPI folded under community criticism that they were “Ruining it For Everyone.”

More history to come….it’s a work in progress! 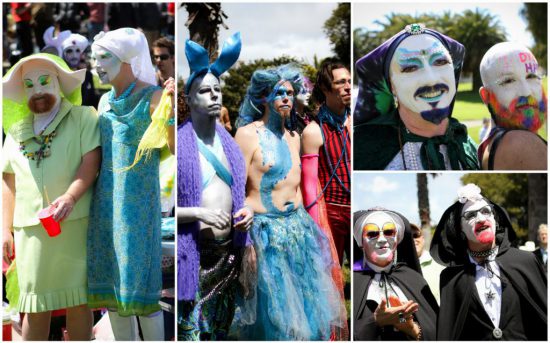