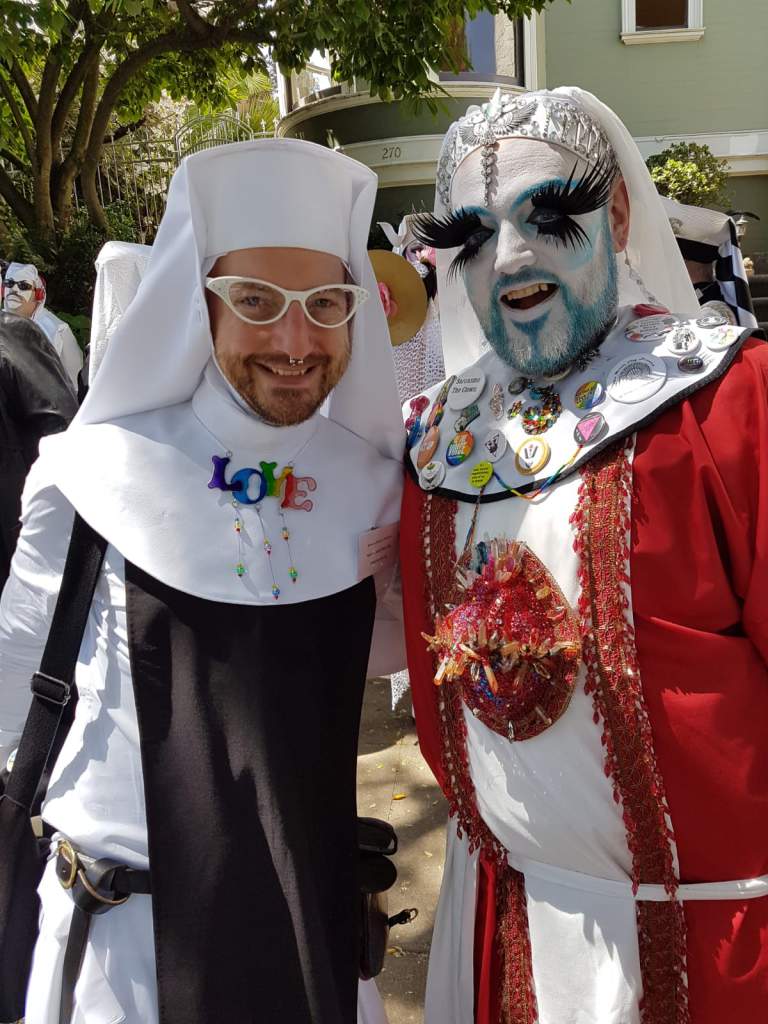 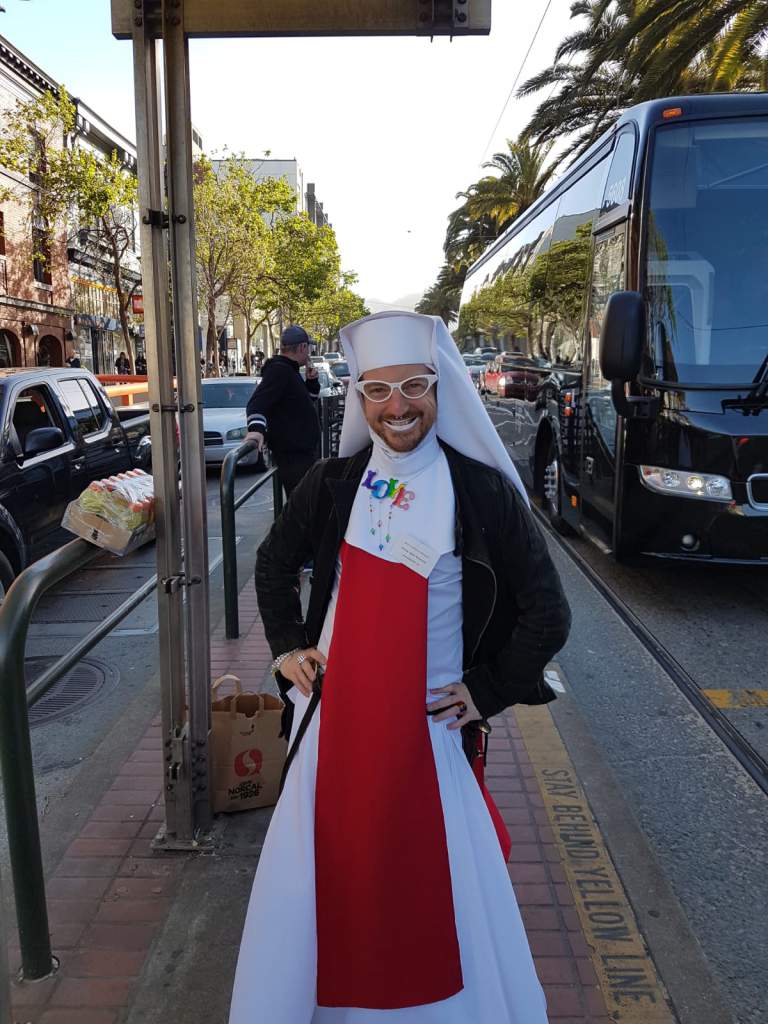 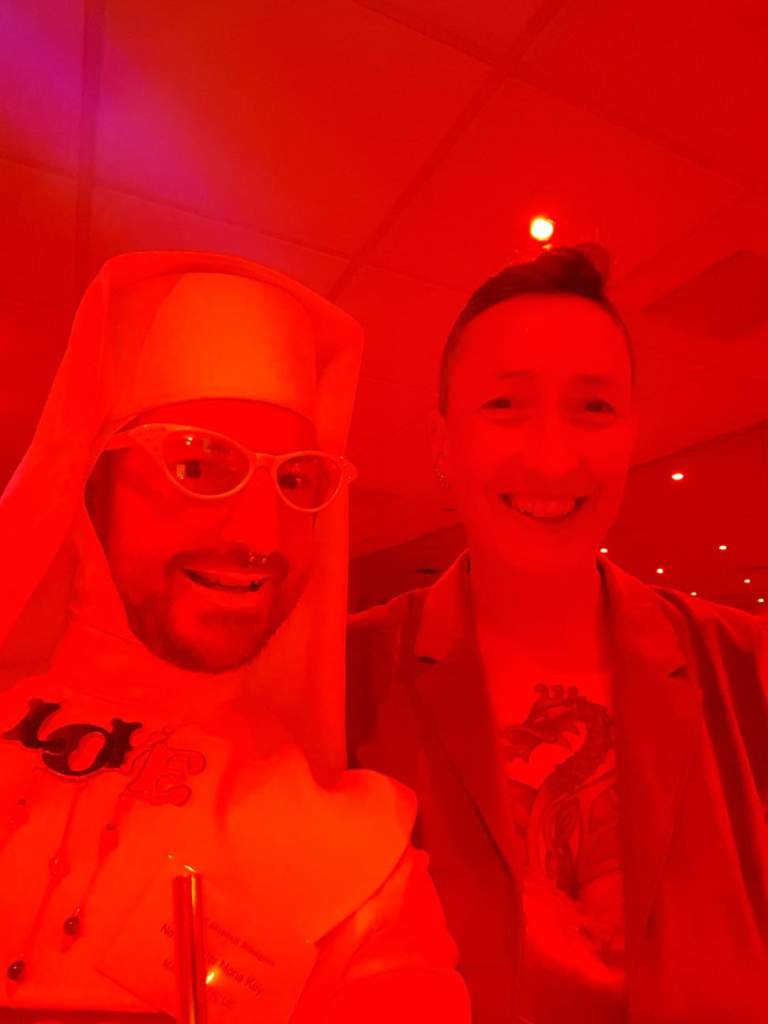 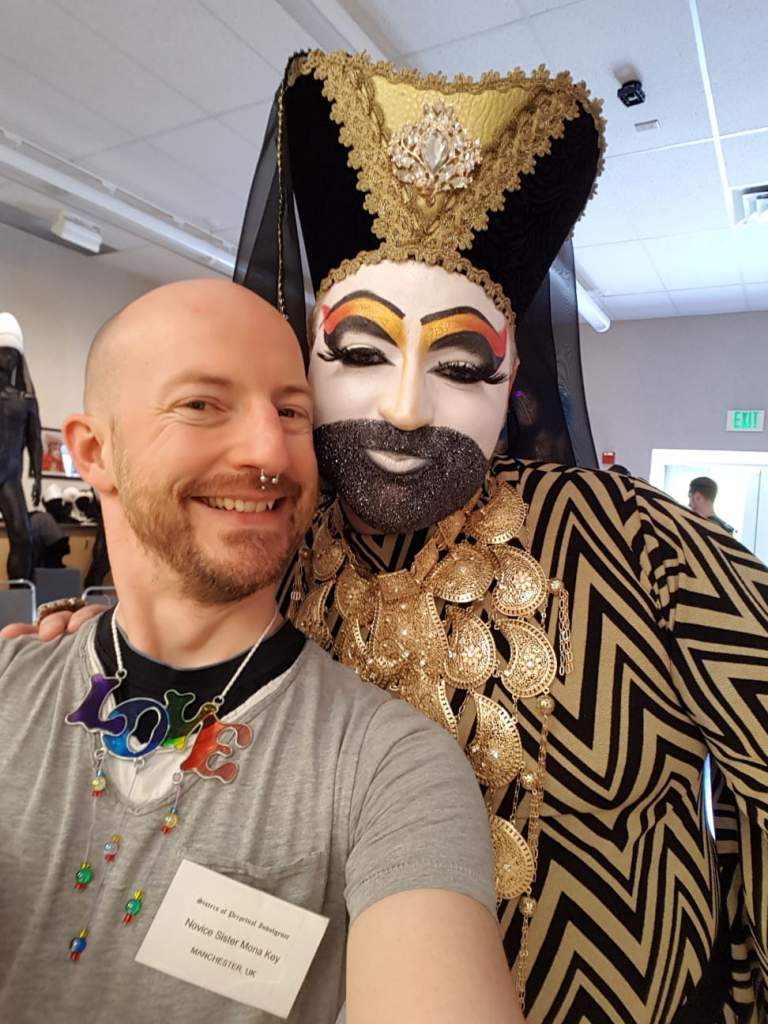 Novice Sister Mona Key was set loose upon the fair city of San Francisco, the Mother House of the Sisters of Perpetual Indulgence, to help celebrate the 40th anniversary of the order’s founding.

From Nuns of Buses, to Nuns on Slides, Novice Sister Mona tells us about her pilgrimage to the Mother House.

15 April
Novice Sister Mona touched down at SFO and no sooner than she arrived at her AirBNB, she dashed out to Strut in the Castro, to see the opening of the gallery. Here, Founders and Originals, including Sister Soami Delux (formerly Sister Missionary Position), Sister Vish-Knew, and Sister Freida Peoples (the first Black Sister), shared some stories in front of paintings by the artist Ramon Vidali, who sadly succumbed to Aids in 1985. In just over a year, he had painted 26 portraits of the Sisters.

Novice Sister Mona mingled with other sisters, meeting new faces and seeing sisters in and out of habit. It was the first toes into the water for the Novice, and she was keen to make good impressions (or bad ones perhaps, who knows?).

16 April
The next day was an experience. It opened with a didactic experience with Sister MayJoy B withU. Novice Sister Mona, along with Nuns from across the world, mingled and interacted with each other according to some very strange rules. The overall message was one of self-care and awareness of our own needs, as well as the needs of others.

In the Evening, Novice Sister Mona manifested for the first time and boarded the Bus! 120 Sisters on two buses roamed the City and stopped off at several bars, ministering to the people and generally spreading joy. At the Eagle, Novice Sister Mona asked a handsome young bootblack to attend to her boots. But soon, it came time for bed, as a Novice Sister has strict curfews.

17 April
On Wednesday, Novice Sister Mona joined with Sister Lida Christ (Boston) to do a spot of shopping, but quickly met up with Sister Soyuna Pasiva and Novice Sister Cheeky Teetah (both from Washington DC) and ended up at the top of Twin Peaks. It was a windy day, but the sights were magnificent, and they all resolved to return in habit for some more photos.

18 April
Thursday she attended an interesting talk on identity, learning lots about the various different identities of Nuns across the world, and learning much about herself.

In the evening, she attended the Last Supper. She had spaghetti and meatballs with Nuns from all over, and the Founders and Originals answered questions we were all itching to ask. Sister Roma was the MC for the evening, and Novice Sister Mona had her turn to showcase that she was representing from Manchester. Mona managed to keep her white guimpe and veil spotless, evidence of a miracle perhaps?

She spoke with some of the originals and founders, including Sister Vish-Knew, who was very disappointed that our Sister BangBang had to go and have a back operation during conclave, and Sister Mary Media, who loved that she was in plain face rather than whiteface.

19 April
A long drive up to Guerneville, to help celebrate the 18th anniversary of the Russian River Sisters. Mona watched as the House hand out $31,000 of grants to various community organisations and charities. This was on top of a severe flood that wiped out a lot of the area only 7/8 weeks previous.

A shorter drive back, as traffic was less hideous, and Mona went straight to bed like a good nun that she is.

20 April- Saturday
Time to get ready for a procession of the Sisters, all dressed in white. Sister Mona had been given permission to deviate from her standard novice habit, which is black, to wear a white skirt and top, so she could look the part. It was an ethereal experience to march in silence (except the occasional squeak of Sister Unity’s rubber chicken) with 350 other Sisters, and many of the gathered faithful were moved by it as well.

Many in Dolores Park who had partaken of the fragrant grasses were less moved, and more confused, but Sister Mona helpfully gave one of them the Manchester Sisters flyers, to help them understand it was a Sister thing.

The procession ended in the holocaust memorial garden at the top of the Castro, where a brief ritual was enacted. Mona then made friends with the Washington DC house and went to Hamburger Mary’s. Mona proposed to the DC sisters that perhaps the US wanted to rejoin the UK, but sadly this was politely declined (it was worth a try).

Later came the Red Dress Boat party. 300 nuns on a boat, and they all saw red. Well, red dresses. It was fabulous to mingle with nuns again from across the world. It was here that Moa realised that Sister Bearonce Knows was much nicer than Sister BangBangLaDesh, but fortunately BangBang wasn’t around to push Mona overboard. In fact, there were no fatalities. And again, whilst they stopped off at Alcatraz, BangBang was nowhere to be found. I guess that was why she made her excuses as someone (probably Sister PurrDo) gave her the heads up that she would be on Alcatraz for a long long time.

21 April- Easter Sunday
Sister Mona’s pilgrimage was almost over, but the piece de resistance of the conclave had to be Easter in the Park, which this year had returned to the iconic Dolores Park.

The day was glorious, so glorious that Sister Mona raised her umbrella to give herself a little bit of shade. She was escorted by the sublimely ridiculous Sister Foxxxy Moron, from the Chicago House, and they trolled the park. At one point they end up at the young person’s play area, and Sister Mona felt moved to see if she could fly, well, slide and so she managed her way up to the slide and did she fly? No, but she slid well, racing the other children (for she isn’t really much bigger), and spread joy amongst the smaller ones (and the ones looking after them).

Next, Mona and Foxxxy got thirsty, and they had been in the park for a few hours, so they went to spread joy (or their legs as some would argue) at a close by bar, where they met a handsome polyamorous family of boys from San Diego, who graciously paid tithes in the way of vodka to the thirsty nuns.

Easter was in full swing and soon the bar was full of Easter bunnies, and gathered faithful all making their way towards Dolores Park. Foxxxy and Mona thought they had best return before anyone of importance had noticed their absence, and so they returned. The park was full to bursting, and Foxxxy and Mona did not get far before being stopped to minister to various gathered faithful, making sure all were hydrated and sun-creamed to within an inch of their lives. So much so that somehow, Mona had missed the key part of the pilgrimage, that of seeing the thorny crowning of Hunky Jesus in the Park. Oh well, there’s always next time!

Of course, it was not over, and as promised, Mona and Foxxy joined back up with Sisters Soyuna Pasiva and Cheeky Teetah, as well as Sister Lida Christ, and trekked back up to Twin Peaks, habits and all, for an impromptu (but carefully planned) photo shoot at the top of the hills. There they braved vicious winds to land the perfect shot, and they felt the spirit of the Founders inside them (actually that was just the Vodka, but it felt the same). They also felt the spirit of Sab Francisco deep within them, but that was just the wind, sent by BangBang to try and ensure Mona’s demise. Fortunately, Mona was wiser, and kept herself intact as she trekked back down to safety at lower altitudes.

It was time for refreshments and Mona doesn’t remember much of what happened that evening. Still, it must have been good, she woke up still in Habit.

22 April- Monday
Alas, comes the end of Sisters Mona’s pilgrimage, and as a final act of sisterly unity, Mona and Sister Fluffy Harrington from the Memphis House (yes, Mona did get about a bit) visited Grace Cathedral with other sisters. Mona walked the labyrinth and discovered that labyrinths are much much much longer than you think. She also realised that she is incapable of walking across a labyrinth, and so had to walk even more to get out of the thing.

Of course, no trip to San Francisco, Sister or otherwise, is complete without a trip to Mr S Leather, and that, my dears, is where Sister Mona’s Conclave fades to black (rubber)…